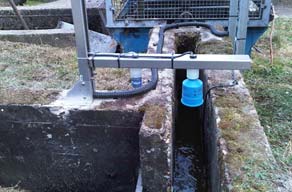 The ability to adapt to changes in its function is often a key factor when choosing a flow metering system.

The ability to adapt to changes in function is often a key factor when selecting a flow metering system. So when a leading UK food manufacturer approached RS Hydro needing a system which combined good usability with extra functions for use in the future as changes were made to the site, the choice of equipment would be key to providing an effective solution. The application covered two monitoring points. One using a velocity sensor and the other using a custom made weir. It was decided that using the same flow meter at both locations would allow the user to collect data using the same process and software applications, saving time and money. It was decided that the ideal unit for use in this application would be Siemens OCM III open channel flow meter.

The standard OCM III unit comes with multiple outputs including relays and analog outputs to control valves and pumps. It is also capable of pacing a sampler if flow-rate triggered sampling is required. The DC input of the unit also meant that no secondary power source was required to provide power to the velocity sensor. The data logging of the OCM III is adjustable from once per day to once per minute. The daily minimum and maximum flow rates and temperatures are logged along with the time that they occurred. Daily totals are also recorded, and the unit can be programmed to record data at a higher rate when necessary conditions are met.

The adaptability and versatility of the OCM III proved to be successful at the two measurement sites, accurately measuring flow over the rectangular weir, and using the area velocity method with the velocity sensor. The adaptability to user demanded changes is a key strength of the Siemens unit.